The New Jersey winter of 2014 was bitterly cold. Everything froze, including this home’s pipes. While the homeowners were out of the country traveling, a pipe on their second floor froze and burst, spilling tens of thousands of gallons into their home.

Prime Draft Studio was brought to the home by Brian Rolph of Restoration and Decorating General Contracting, one of the first emergency responders controlling and abating the disaster. He helped the homeowners to deal with the damage, but they wanted to take advantage of the situation by having Prime Draft Studio come in and do a complete architectural renovation of their first and second floors in addition to replacing all the damaged wall, floor, and ceiling finishes throughout the home.

Their dining room was too small and was awkwardly placed. It was not directly accessible from the kitchen. Instead, one had to walk through the family room to reach the dining room, which made for quite the hassle during family meal times. Older homes, like this one, were built differently from more recent ones due to how families used to function. For example, the kitchens of 1920’s were built for one person. Cooking was a more solitary action. In comparison, today’s residential kitchen is a gathering, meeting, and social space. Today’s kitchen requires a spatial configuration that is less compartmentalized and is, instead, capable of handling the dynamic of a heavier traffic flow and pools of congregation.

In order to meet the needs of a modern kitchen, we decided to open up the first floor some. We converted the kitchen, dining room, and family room from three separate rooms into one large single room in our renovation

Additionally, the stairs to the second floor had separated the formal living room from the kitchen and family room side of the house, as they were enclosed by walls and accessed through a hinged door. We removed the door and opened up the structure of the stair’s landing to add to the overall visual flow of the first floor.

Our renovation didn’t stop there, however. Other areas of the project included expanding the master bedroom on the first floor. A new en suite bathroom and closet area were located within the new addition to the house, back-to-back with the modified kitchen located in the other half of the addition.

As well, we rezoned a full bath accessible from the upstairs hallway to be included within an existing bedroom by relocating of the bedroom entry further into the hallway. We also expanded a second bathroom through the placement of a new study area over the first-floor master suite addition.
In the basement, we gutted each of the rooms down to the bare concrete and refinished with wallboard, a tile floor and gypsum board ceiling. We also added a French drain along the perimeter walls of the basement, leading to a new sump pit. This was done to ensure that if anything like this ever happened again, the water would drain properly rather than remain in the basement, damaging the home. Though we loved working on this home, we wanted to make sure we’d never have to come back again. 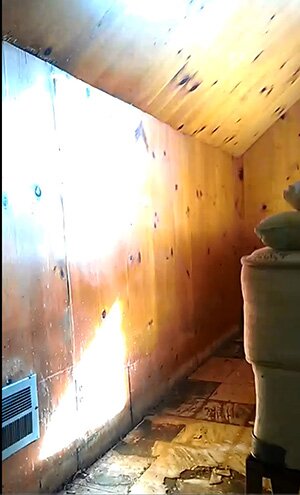 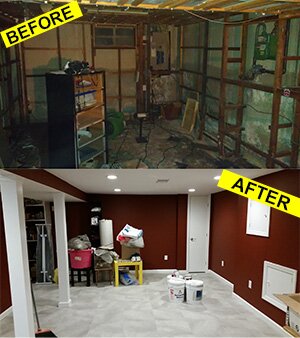